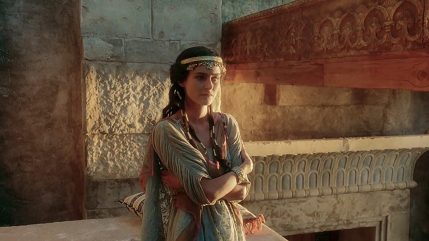 Track 1:  The Courage of Queen Esther

The Book of Esther to explain how the feast of Purim came to be celebrated by the Jews. Esther, the beautiful Jewish wife of the Persian king Ahasuerus, and her cousin Mordecai persuade the king to retract an order for the general annihilation of Jews throughout the empire. The massacre had been plotted by the king’s chief minister, Haman, and the date decided by casting lots (purim).

It took great courage for Esther to approach the king with a personal request. This was unprecedented. She risked her life to do so. She told the king that she had prepared a banquet for the king and his servant Haman. Fortunately, the kihg responded favorably. Reading from Esther:

The king and Haman went in to feast with Queen Esther. On the second day, as they were drinking wine, the king again said to Esther, “What is your petition, Queen Esther? It shall be granted you. And what is your request? Even to the half of my kingdom, it shall be fulfilled.” Then Queen Esther answered, “If I have won your favor, O king, and if it pleases the king, let my life be given me– that is my petition– and the lives of my people– that is my request. For we have been sold, I and my people, to be destroyed, to be killed, and to be annihilated. If we had been sold merely as slaves, men and women, I would have held my peace; but no enemy can compensate for this damage to the king.” Then King Ahasuerus said to Queen Esther, “Who is he, and where is he, who has presumed to do this?” Esther said, “A foe and enemy, this wicked Haman!” Then Haman was terrified before the king and the queen.   (Esther 7:1-6)

The king was enraged. Reading from Esther:

Is Queen Esther’s story our story? We are living in treacherous times. There are many Haman’s. They are smooth abd cunning, but in their hearts they are corrupt and oppose the plans of God. They are liars and their god is thye father of lies. Behind the scenes they plan our destruction.

God is going to turn the tables on them, What is required on our part is an act of courage. Where does that courage come from? The psalmist wrote:

Then would they have swallowed us up alive
in their fierce anger toward us;

Then would the waters have overwhelmed us
and the torrent gone over us;

Then would the raging waters
have gone right over us.

Our courage comes from our faith in God. He did not spare his only begotten Son so that we might be saved. He alone is our help and strength. He is waiting for us to call upon him in a day of trouble. The Apostle Paul wrote:

For whosoever shall call upon the name of the Lord shall be saved.   (Romans 10:13)

These readings seem to be about a question concerning our authority in God. In the Old Testament, God distributed his Spirit among the elders:

So Moses went out and told the people the words of the Lord; and he gathered seventy elders of the people, and placed them all around the tent. Then the Lord came down in the cloud and spoke to him, and took some of the spirit that was on him and put it on the seventy elders; and when the spirit rested upon them, they prophesied. But they did not do so again.

Two men remained in the camp, one named Eldad, and the other named Medad, and the spirit rested on them; they were among those registered, but they had not gone out to the tent, and so they prophesied in the camp. And a young man ran and told Moses, “Eldad and Medad are prophesying in the camp.” And Joshua son of Nun, the assistant of Moses, one of his chosen men, said, “My lord Moses, stop them!” But Moses said to him, “Are you jealous for my sake? Would that all the Lord’s people were prophets, and that the Lord would put his spirit on them!”

A similar situation occurred in the New Testament:

John said to Jesus, “Teacher, we saw someone casting out demons in your name, and we tried to stop him, because he was not following us.” But Jesus said, “Do not stop him; for no one who does a deed of power in my name will be able soon afterward to speak evil of me. Whoever is not against us is for us. For truly I tell you, whoever gives you a cup of water to drink because you bear the name of Christ will by no means lose the reward.   ()

Spiritual jealousy is at play.